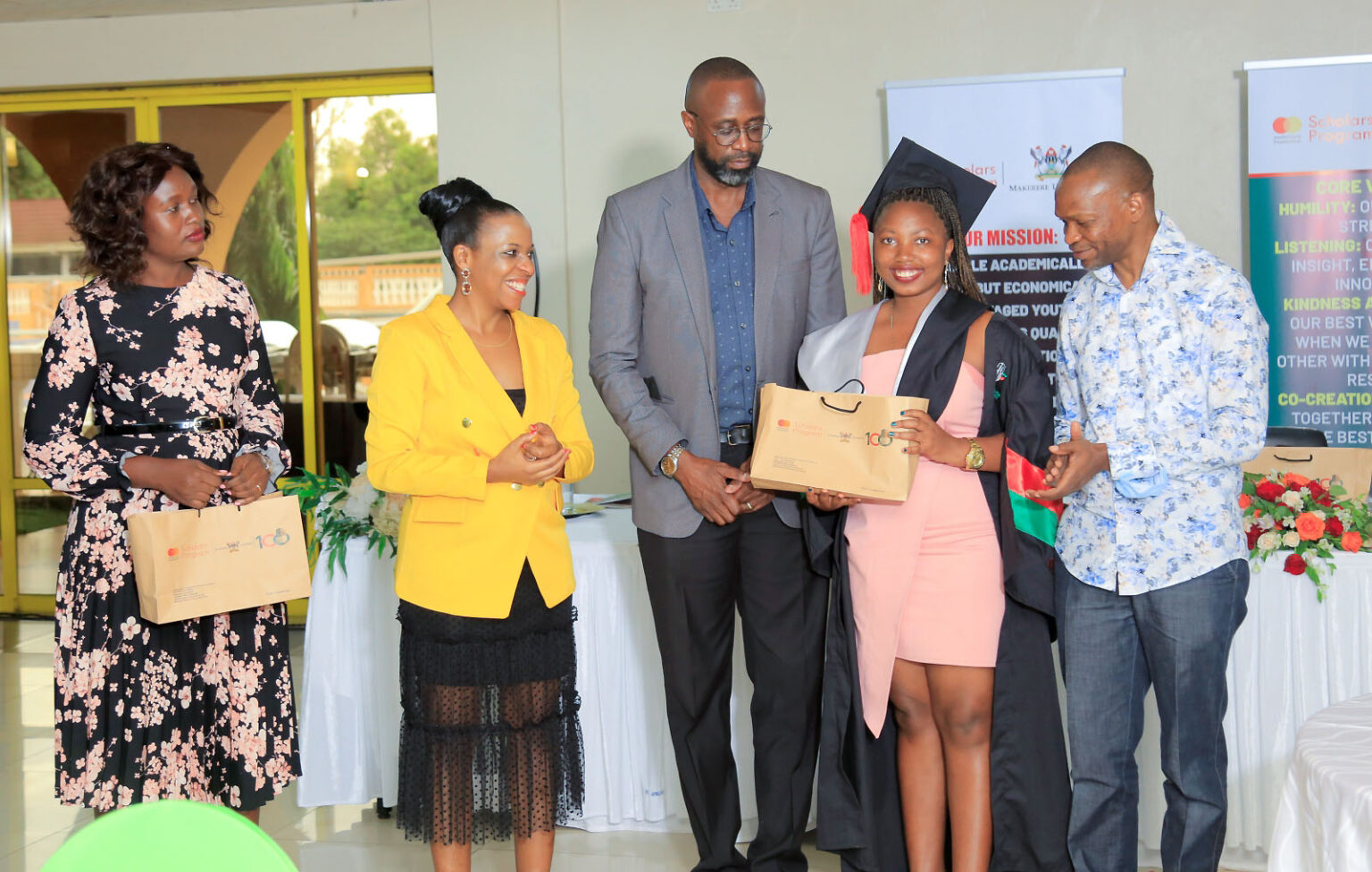 Prof. Barnabas Nawangwe, the Vice Chancellor of Makerere University urged the Graduates of Mastercard Foundation to become good ambassadors of both the University and the Foundation in their Communities. He made the remarks in a speech read for him by Prof. Umar Kakumba, the Deputy Vice Chancellor, Academic Affairs, during a colourful function organised to congratulate and honour the 61 graduates of Mastercard of Foundation who just graduated at the 72nd graduation ceremony at Makerere University.

Prof. Nawangwe pointed out that Mastercard Foundation Scholars Program at Makerere University recruits academically excellent but underprivileged students and highly disciplined, therefore he expected them to excel even at their places of work and in their communities.

“Universities world over thrive from such partnerships and collaborations like Mastercard Foundation Scholars Program for academic and infrastructure development. I, therefore, call upon all stakeholders to support such initiatives, so that we can attract more partnerships of this kind in Uganda and Africa,” he said.

He pledged the support of the University to the Scholars Program, and that he was confident that the partnership between the University and the Foundation would go on for many years to come.

“I thank Mastercard Foundation for its generosity in offering Scholarships to these young people, which enabled them to attain University education, and has made this graduation possible. The University is committed in giving Mastercard Foundation Scholars Program all the support they need, and I call upon all other Stakeholders to support this Program.” Prof. Nawangwe remarked.

On his part, Prof. Umar Kakumba, the Deputy Vice Chancellor and Chairperson of the Steering Committee of the Scholars Program at Makerere University called upon the graduates to make good use of the knowledge and skills they had acquired to make meaningful contribution in their communities and the country at large.

“Mastercard Foundation Scholars Program is designed to provide the Scholars with holistic support, which includes academic curricular that is relevant to the job market, mentorship, counseling and psychosocial support services, as well as experiential learning through volunteerism, internships and social entrepreneurship; and connections to jobs, graduate internship, and opportunities for further studies through its network of partners. I would like to urge our graduates to tap into the various opportunities that the Scholars Program presents to them both during their stay in the University and even after graduation.” Prof. Kakumba pointed out.

Mr. Bukenya read the message from the President of the Mastercard Foundation, Ms. Reeta Roy, who urged the graduates to go out in the world and try out new things.

“Give yourself permission to have a dream, to try new things, to fail, and to learn. It is permission to move forward without a clearly defined path.  Make mistakes and learn from them. By trying, failing, and learning you will get to know yourself.”Ms. Reeta urged graduates.

The Chief Guest at the function, Dr. Ruth Biyinzika Musoke, the Director, Skills Development at the Private Sector Foundation Uganda, urged graduates to lower their expectations as they venture out in the world of work. She cautioned them against expecting quick financial gains, emphasising that they would rather seek to gain real work experience and skills.

“My dear graduates, you are entering the job market at the time when the industry is recovering from challenges posed by COVID19, therefore lower your expectations. Do not expect to get those high paying jobs immediately; rather seek to gain real work experience from any job opportunity, however small that job may be.” Dr. Musoke said.

Dr. Musoke remarked that the Private Sector Foundation Uganda was proud to be associated with Mastercard Foundation Scholars Program, and pledged to support the 61 graduates in finding placements for graduate internship and even jobs.

Dr. Justine Namaalwa, the Program Coordinator of the Scholars Program at Makerere University, congratulated the 61 Graduates, Class of 2022, and thanked them for contributing to the realization of the overall goal of Mastercard Foundation, which is;“To Educate and Empower the next Generation of African Leaders”.

Dr. Namaalwa revealed that the Scholars Program had so far recruited and educated 1,032 Scholars, surpassing the earlier target of recruiting 1,000 Scholars, of which 496 Scholars had successfully completed their academic programs and graduated.

She applauded Mastercard Foundation and Makerere University for the partnership, which had transformed the lives of many young people, through offering them quality university education.

“Today we are proud that out of 1,032 Youth that have been supported by the Program, up to 435 graduated by May 2021, and we are again proud to add another 61 bringing the mark of 496 (48%) Graduates of Mastercard Foundation Scholars Program.” Dr. Namaalwa pointed out.

“To Mastercard Foundation and Makerere University that have immensely blessed us and bestowed education upon us through the most prestigious scholarship globally, we cannot thank you well enough. The best gift we can give in return is to hold another young person’s hand and support to get an education, which is the best investment anyone can ever give to another person.” The Scholars pledged.

The colourful function was held on 28th May 2022 at Hotel African in Kampala and attended by the graduates of Mastercard Foundation together with their Parents and Guardians. This was the 5th graduation ceremony of the Scholars Program at Makerere, the first one having been held in 2018.