It was a cheerful moment when the Makerere University Vice Chancellor, Prof. John Ddumba-Ssentamu handed over MasterCard Foundation Scholarship Award letters to 256 students.

The highly colorful Scholarship Award Ceremony for the Cohort Four Scholars on the MasterCard Foundation Scholars Program at Makerere University was held on 29th August 2017.

The overjoyed scholars donned in light blue t-shirts thanked MasterCard Foundation Scholars Program for the great academic opportunity awarded to them. They vowed to take their academics seriously and pledged to meet the expectations of the sponsors and parents at large. “I am so happy today. I cannot believe that I am at Makerere University. I don’t know how I can sincerely thank MasterCard Foundation for the great work you are doing in enabling the African child to receive higher education,” said Mr. Kabuye Danniel, one of the cohort 4 scholar pursuing a Bachelor’s Degree in Education.

Kabuye a son to the late Mr. Kabuye Deogracious and Ms. Nassali Rose of Nsumbe Lukwanga Wakiso District had lost hope of joining University after years of struggling for his own school fees at a tender age. According to him, he had promised to push up to high school and find his way out for the job search.

“I took up his idea though I had doubts whether the program existed. When we received the A level results, I decided to give it a try. I am so happy that I have been given a chance to attain higher education. This opportunity is the best gift I have ever received,” Kabuye happily said. “This chance has uplifted my hope of building the future I have always dreamed of. Being here now, I have a clear view that I will fulfill my dream of building an orphanage I always yarned for. Thank you MasterCard Foundation team, thank you Dr. Florence Nakayiwa and thank you Makerere University,” he added.

Ms Kimenyi Madrine a first year student pursuing a Bachelor of Arts with Social Sciences could not hide her tears of gratitude when sharing her personal experience. Her verbal and non-verbal communication could effusively tell the story of the beauty of joining MasterCard. “I promise to do the needful for the best of my future and the future of other people and to my scholars I congratulate you all,” said Kimenyi.

“On behalf of the University Management, I congratulate and welcome each and every one of our 256 new Scholars to Makerere University. Today’s ceremony gives me even great joy as we witness the largest number of awards so far!” he remarked.

Prof. Ddumba-Ssentamu advised scholars to take the scholarship award as a privilege when he said, “consider yourselves lucky that out of the out of 4035 applicants, you are among the selected 256 scholars. This is your perfect opportunity to go from simply accessing higher education to excelling as a prolific scholar.” He emphasized the need for academic excellence and advised the scholars to effectively utilize the resources and student support services provided under the MasterCard Foundation Scholars Programme at Makerere University and significantly contribute to the transformation of their lives.

In the same spirit, the Chairperson Selection Committee applauded the Advisory Board for initiating an affirmative action that aimed at a balanced recruitment in the Eastern and Northern regions of Uganda. According to Associate Prof. Aaron Mushengyezi, the affirmative action bore fruitful results that saw 30% of the scholarships awarded to applicants from the Northern and Eastern regions of Uganda.

He urged scholars to focus on their studies and aim for better grades so as to account for the sacrifices made by the sponsors of the program.

“You should make the most of this opportunity. Do not betray you guardians, single parents who have struggled to put you where you are now and always be grateful to God.  We expect you to be responsible citizens in the future therefore work at your best to make us proud,” he said.

Started in 2014 with 49 students, the MasterCard Foundation Scholars Program at Makerere University currently has 244 continuing in their second, third and fourth year of study. The Project Implementation team expects 30 scholars from the pioneer cohort to graduate in January 2018.

According to the Project Coordinator Dr. Florence Nakayiwa, the program targets to educate 1000 scholars over a period of 10years. 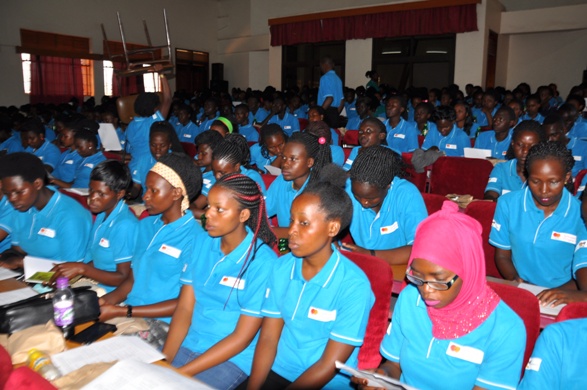 “This year we have been able to register 26 international scholars from Rwanda, South Sudan, Tanzania and Zimbabwe. We are also welcoming the first cohort of scholars transiting from our school Partners FAWE Rwanda and we have received 98 scholars transiting from BRAC our secondary School Partner in Uganda. The Cohort has 132 nationals from the wider Ugandan population. The female Scholars constitute 88% and 12% were boys,” she highlighted

Dr. Nakayiwa applauded MasterCard Foundation Scholars Program for not only providing academic funds to the students but also for grooming and empowering young African leaders of the next generation.

“In addition to leadership, we want to also cultivate a give back culture in the Scholars’ community. We subscribe to the philosophy that to whom much is given much is expected. And we expect our scholars to reach out to those less fortunate that they have been, in different aspects of life,” she remarked.

The Scholars enjoyed every moment of the Award ceremony including the sweet melodies and entertainment from students and staff of Makerere University, Department of Performing Arts and Film