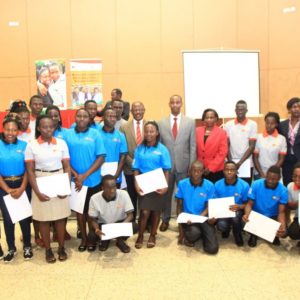 It was a cheerful moment when the Vice-Chancellor of Makerere University, Prof. Barnabas Nawangwe handed over Mastercard Foundation Scholarship Award letters to 432 Cohort five (5) Scholars. The colorful ceremony was held on 9th August 2019 at Makerere University.

The first Cohort Scholars that started in academic year 2014/2015 comprised 49 students and the number has been multiplying at each intake.

“Your path as a future leader starts right here, engaging in constructive intellectual debates, leadership activities, research and innovations. If you stay on this path, we have no doubt that on graduation day you will stand tall and pride in yourself, as a model citizen ready to develop life impacting innovations and solutions that can change your community,” he advised.

Prof. Nawangwe emphasized the need for academic excellence and advised the Scholars to utilize the resources and student support services provided under the Mastercard Foundation Scholars Program in order to excel in their academics.

“Do not be marginalized because of your background, instead work hard, acquire good grades and leave the University with the best degree,” he said.

He thanked the Members of the Advisory, Steering and Selection Committees of Mastercard Foundation Scholars Program at Makerere University and Mentors for ensuring that the program is on course. The Vice Chancellor also thanked the Program Implementation Team for the job well done.

Dr. Justine Namaalwa, the Program Coordinator at Makerere University said that the Selection Committees received 4,700 applications for the available limited slots. She thanked the Committee for doing a tremendous job of selecting the Scholars.

“It was a challenging task but you performed it to your best. This year, we awarded a total of 432 Scholarships, of which 94% are Ugandans and 6% are international students from Burundi, Tanzania, Democratic Republic of Congo, Kenya and Cameroon,”  Dr. Namaalwa said.

The Chairperson of Selection Committee Prof. Aaron Mushengyezi applauded his team for its professionalism, integrity and honesty throughout the entire process.

To the scholars, Prof. Mushengyezi said, “this is a new chapter presented before you. You have gone through a lot to acquire this scholarship. This is the right time to start building your dream and career, therefore I inspire you to work hard to achieve a bright future.”

The Principal Public Relations Officer Ms. Ritah Namisango applauded Mastercard Foundation for instilling a give back culture among scholars. She called upon the scholars to fully engage in the university give back activities such as the Makerere University Endowment Fund Run that will be held on 15th September 2019 that is geared towards the construction of the students Centre.

Munduru Pretty, a Mastercard Foundation Scholar in the 5th cohort, pursuing a Bachelor’s Degree of Developmental Economics at Makerere University thanked Mastercard Foundation for the great opportunity that saved her from getting married at an early stage due to lack of finances for her education after senior six.

She urged fellow Scholars to commit themselves towards achieving their goals since the scholarship is a big step towards their future. The invited guests and Scholars were treated to African traditional dances and live band by students from the Department of Performing Arts and Film.

Article by: Makerere University Public Relations Office and the Communications Unit of the Scholars Program.